My new showreel is now online. With new music and more genres.

In September I got chosen as one of 20 lucky participants for the fmf Master Classes in Kraków 2014. After having recomposed the Bioshock Infinite trailer I got informed that I was one of the few participants to have the chance to take part in workshops with Hollywood professionals for an entire week. 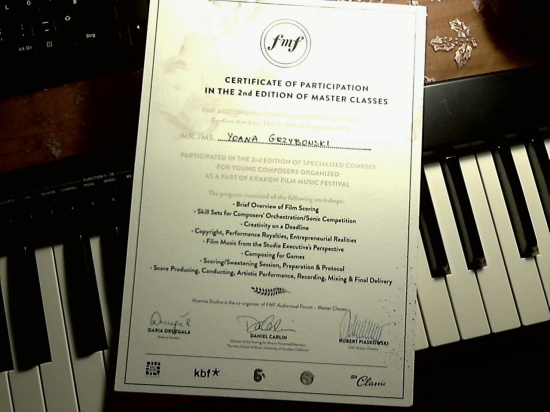 My composition for the fmf-Competition:

A couple of weeks ago I received a mail that I was chosen as 1 of 8 finalists by the judging panel out of more than 200 submissions.
Another week later the even bigger news! After the public voting of the 8 selected finalists, I won the 1st price!

Here is a link for further information: http://www.scorbit.org/contest/

There is a lot going on since 2014! I am working on some great projects, both films and games.
I am now part of the Crew for an online music library. More info coming soon! A short film competition project I have composed the music for will be released shortly.

There is also coming some very very big stuff, I must not talk about yet! … Infos coming soon!

I am super excited about the things that have happened recently and are still happening.

At the moment there are a lot of Contests going on, and one of them I have also participated in was the Scorbit Game Scoring Contest. Keep your fingers crossed and any News regarding the finalist announcement will be updated ASAP.

‘Calling all composers! The original theme called “Destiny’s Door” created exclusively for this contest by Mr. Zimmer himself is yours to reimagine, replay, recompose or revise to your heart’s content. We’re looking for originality, curveballs and adventurous amphonics.’

So far it has been a great experience to have participated in that contest. Again I’ve met so many creative people, both musicians and directors. 6000 participants had the chance to show their skills and it was a pleasure to be one of them.
The Winners will be announced soon. Keep your fingers crossed for me!

Rather spontaneously I made my way to this year’s Gamescom, Europe’s epicenter for games and gamers and thus a central sales and media platform for the industry! It was amazing to meet so many skilled and creative gamedevelopers and artists and can’t wait for next year’s Gamescom.

I have  successfully finished studying Media Composition at SET. The last year  has been an amazing opportunity to get much deeper into music theory and working with ProTools, improve my audio engineering skills and gain amazing new contacts and friends in the music, games and film business.
My graduation certificate has arrived! I’m now officially a game and filmcomposer!

BUSY BAGS Title Song Contest
September – 2012- Big News: I am one of the 5 finalists of the Busy Bags Song Contest!

Busy Bags is an Android Game by Kaasa Solution GmbH in which you act as a manager of the airport on distribution of baggage of the arrived passengers. As soon as the plane lands, you have responsibility to make the passengers without delays get the baggage. The quicker they will make it, the better it will be. If you keep people waiting long, their patience will decrease, and it will cost you valuable points. The game has 50 levels, 5 airports worldwide, 3D environment with possibility of turn and scaling, more than 20 various 3D characters and exclusive musical compositions. Soon there will be new airports and new levels.

After a voting period my track came 5th!

Here is a Link to the Gameplay: https://www.youtube.com/watch?v=VXnjLNBZFlQ#t=27